GOBBLE GOBBLE.  (Which is “turkish” for Happy Thanksgiving!)  By the way, wasn’t George Gobble a great comedian?  Some folks think we should combine Election Day and Thanksgiving, since they both include a lot of turkeys.  (And let’s face it, our politicians do gobble up our taxes!)  While some politicians are “for the birds,” the birds are for all of us, and a reminder that we have a lot to be thankful for.  Even though I make jokes about the political scene, I would be the first to admit that we are blessed to live in a free country where our votes determine who serves, and for how long.  When you start traveling around the world, you quickly realize just how special America really is, and how lucky we are to live in such a glorious place.

This year, my wife is making our family an “international feast.”  (Since you asked, that would be Turkey, sitting in Greece, and after you take a bite, you are Russian to the bathroom!)  My bride is a graduate of the Lucretia Borgia Culinary Institute, so every meal is a treat.  We have our main course in the dining room, but she insists on serving dessert in the bathroom.  (What can I say, she loves pie a la commode.)

Speaking of hazardous places, I noticed that the Oak Ridge Nuclear Facility was in the news this week.  (security concerns)  If you recall, I wrote about the facility in my first mystery novel, THE GRACELAND GANG.  Since I am now an expert on all things nuclear, let me give you some advice:  never trust an atom.  (They make up everything.)  Did you know that the atom bomb was dropped from a plane called the Ebola Gay?  (Talk about over-kill!)

So what else is new?  I recently learned that Cynthia Brian, the lovely and talented host of “Be The Star You Are,” has a not-so-secret connection to CCRR!  (No, not Creedence Clearwater Revival.)  Believe it or not, the letters stand for:  California Champion Rooster Raiser!  Now I know why she thinks Henny Youngman is so funny!  And yes, Rooster Cogburn is her favorite lawman!  Cynthia is so smart that she actually knows why the chicken crossed the road!  I must remember to ask her which came first, the chicken or the egg.

Jack Drucker, the host of The Book Club Radio Program, is producing a special Christmas broadcast.  He will actually be interviewing an up-and-coming author named Charlie Dickens.  (Charlie wrote a book about one of his girlfriends in London.  I think it’s called “A Christmas Carol.”)  Anyway, in honor of the holiday season, he will also be re-broadcasting both of my legendary radio interviews!  I will publish the details as soon as I have them.  (The interviews were among the most listened to of the year, and we discussed DEVIL’S COVE and then THE SECOND MOURNING.)

For those of you that might have seen the modest article about me in the Chicago Tribune, I would like to say that the rumors are true!  I am halfway through the fifth “Adam Gold Mystery,” which will be titled:  “A RUN FOR THE MONEY.”  The story takes place in the South, primarily in Richmond, Charleston, and Lexington, Kentucky.  This time, Adam Gold will confront grave robbers and horse thieves in pursuit of strife, liberty, and the happiness thing.  I am thoroughly enjoying the book, which should be finished some time this spring.

Well, in closing, let me wish all of my family and friends a wonderful Thanksgiving.  I do hope you are able to be with the ones you love, and that you have a splendid, and truly American holiday.  Please remember not to serve those nasty cranberry globs, mincemeat pies, or those damn celery sticks.  (Trust me, nobody likes that stuff!)  See you next Sunday!  Love to all,

P.S.  There just might be a photograph attached to this blog! 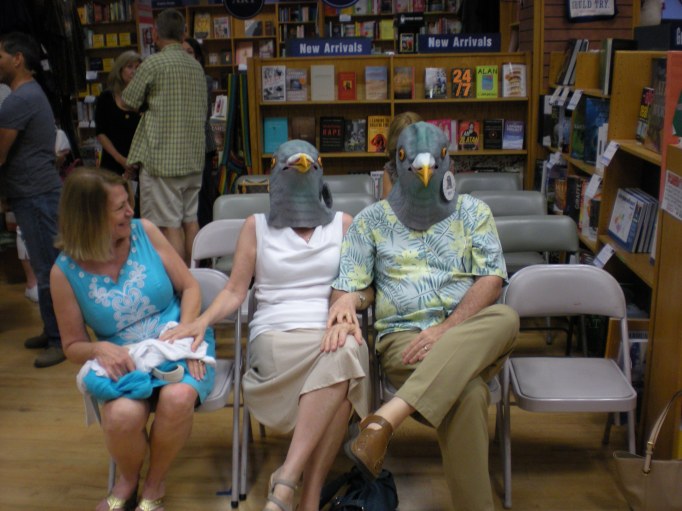