ALOHA, my dear friends!  Would you like to guess where I’ve been the last two weeks?  Way out west!  We started our trip in Los Angeles, “The City of Angels,” which was actually hotter than hell.  After picking up a book award and sampling some groovy restaurants, we boarded a Delta jet and made our way to Maui, Hawaii.  (Neither Brad or Angelina were available for lunch in L.A.)  Upon our arrival in Maui, it was party time!  My beautiful daughter, Rebecca Lee, got married at the lovely Four Seasons Resort, which is a sight to behold.  (And so was she!)  The resort is over-the-top gorgeous, and one of the most beautiful joints I ever had the pleasure of visiting.

How classy is the Four Seasons?  Well, when you check-in, they offer you some Macedonia nuts, sun tan lotion, and a colorful lei.  (I could make some jokes about the lei, but this is a family blog!)  I loved the ukulele music in the lobby.  During Christmas they play Don Ho Ho Ho records.  (Come on, that was funny.)

Our guests were treated to an assortment of pre-paid excursions on the surrounding islands.  Some were better than others.  On Lanai, guests were offered a tour of a snake farm that featured Burmese Pythons!  (Similar to Boa Contractors)  One of the reptiles had a sense of humor, so I named him Monty Python.  However, due to their mean dispositions, I kept my distance.  (Remember the old saying?  Let pythons be pythons?)  The biggest critter was about 15 feet long, but he refused to have sex with the other snakes.  (I think he had a reptile dysfunction.)

On Molokai, our beloved guests were invited to visit a now-defunct leper colony.  On a scale of one to ten, this tour was a two.  (Maybe I shouldn’t use the word “scale?”)  I hear that some of our guests remained on the bus and refused to shake hands with the tour guide.  I made some good jokes on the bus, remembering that laughter is contagious.  (Then again, so is leprosy!)

A few of the young girls got to visit the island of Kauai.  (But as Frankie Valli once said, big girls don’t Kauai.)  Hey,  do you think Frankie Valli ever stayed at the Four Seasons?  Hmmm.

As you might have guessed by now, this was a “destination wedding.”  (The final destination being bankruptcy court!)  All of our pampered guests were given lava lamps as a “welcome gift,” but a few folks got second-degree burns.  (My daughter insisted on using actual lava!)  We hosted a rehearsal dinner, wedding dinner, and  a brunch on day three.  Unfortunately, we couldn’t find a Costco on Maui, so we were forced to serve an assortment of traditional Hawaiian fish…..  Ahi Tuna, Kumu, Monchong, and Opakapaka.  (The last fish was from South Florida.)

Between visits to the magnificent beach, our guests took full advantage of Hawaii’s natural attractions…  Tsunamis, earthquakes, and volcanoes!  Actually, the only active volcano was on the Big Island.  (I’m referring to the Kilauea Volcano, which is still erupting!)  Some smoke drifted our way, but nothing to be concerned about.  I told a local official that they should call the volcano “Killyouanywaya,” but he didn’t seem to like my suggestion.

In all, or mostly, seriousness, Maui is incredibly beautiful.  A true paradise.  While we were touring the island, we caught a glimpse of Oprah’s house, and the vacation home of a fellow Austinite named Willie Nelson.  I’m not sure why, but Willie’s house was surrounded by a thick cloud of smoke that smelled vaguely familiar.  He lives on a mountain, way up high, which seems fitting.  On the day we left, a delivery truck ran over Willie’s foot!  (He was playing “On The Road Again!”)

Well, my fellow Macadamia nuts, I must say Aloha and take my leave.  (I need to unpack my suitcase and wash all those room towels!)  We were truly blessed to host such a marvelous affair on such a lovely island, but it’s great to be home again.  If you scroll down, you will find some photographs of my recent adventure.  I usually conclude by saying “Love to all,” but on this Sunday, I shall leave you with a sweet Hawaiian phrase…..

E lei kau, e lei ho’oilo i ke aloha.   (Love is worn like a wreath through the summers and winters.  Love is everlasting.) 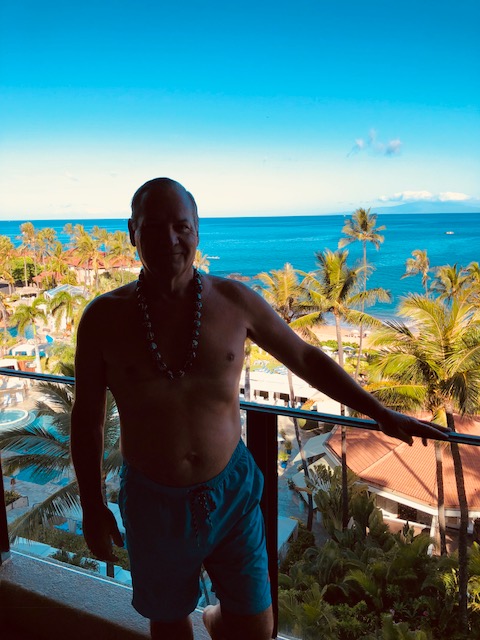 5 thoughts on “WOWEE, A WEDDING IN MAUI!”